The History of the Berger Picard In Canada 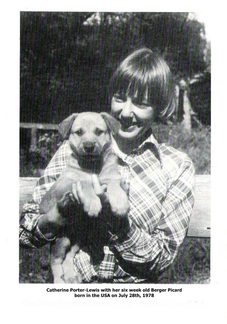 Although the Berger Picard is the oldest French herding breed, it is not very well known and still quite rare.   The short history of the Berger Picard in Canada dates back to 1978. Mrs. Catherine Porter- Lewis from New York, USA had imported a fawn Berger Picard bred by Mrs. Catherine Gide in France, Melissa des Audides, and intended to breed her and contribute to the establishment of the breed in the USA.  Being a rare breed, compatible Berger Picard males were not an easy thing to find, and she was referred by her breeder to Mr. Bruno Colpron who lived just north of her in Canada and owned a fawn male by the name of  L’Dorado du Carnaval des Loups(1).

Mrs. Porter-Lewis travelled to Canada with Melissa des Audides and from that breeding was born what is thought to be the first Berger Picard litter in the USA.  Under the name of “Du Petit Marais” eight fawn charbonné puppies were born July 28th, 1978; seven boys and one girl. It was not an easy task to find good homes for these puppies since no one knew about this breed back in the 70’s. Two were placed in the mid-west, three in Canada and three remained in the north eastern part of the USA. 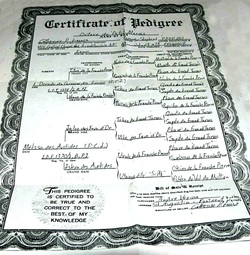 The only girl was sold to Mr. Bergeron (1) in Canada and two of the boys, Octave and Olaf du Petit Marais were sold to Mr. André Vézina St-Augustin, QC, Canada.  It is not known what happened to Mr. Bergeron’s dog, but Mr. and Mrs. Vézina had the dream of breeding  Berger Picards and eventually having the breed officially recognized by the Canadian Kennel Club.   Many setbacks awaited the couple as they travelled the unpredictable road to knowledge of this fascinating breed. Their perseverance finally paid off and the first Canadian bred litter was born in 1986 from Vamba de la Grignauderie, a French import, and Octave du Petit Marais, the puppy they had bought from Mrs. Porter-Lewis eight years earlier.

The breed was not widely known in Canada and the bulk of the Picard population was mostly in the province of Québec.  In 1989, there were about 45 Berger Picards in Canada (2), the majority of them produced by Mr. Vézina under the name “Élevage de la Picardie”. The breed was not yet recognized by the CKC and many steps still had to be done to fulfil the requirements of the official Canadian dog registry. Once again Mr. and Mrs. Vézina tackled the task with determination and the Berger Picard was finally recognized by the CKC in August 1992. Mr. Vezina has most certainly earned the nickname of “Father of the Canadian Berger Picard” with all of the work, time and money he has invested in promoting the Berger Picard and getting the breed recognized. The breed didn’t progress much in Canada until Mr. Vezina, who had been away from breeding for 15 years for health reasons, imported a new couple of Berger Picards from France in 2006 and started breeding once again.  In 2008, he had the pleasure of registering the first litter of Berger Picard’s in the CKC stud book.  In the meantime, other breeders had become aware of this amazing rare breed and breeding prospects were imported into Ontario and Quebec by these newly found Berger Picard enthusiasts. A new chapter in the history of the Canadian Berger Picard was on the verge of being written. 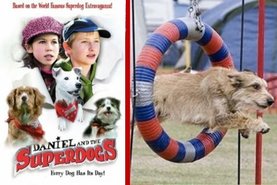 Just as the Americans have their Berger Picard movie star that was featured in the movie Winn Dixie, Canada also has its own Picard movie star. An eight week old Berger Picard named Uhel was imported to Alberta from France in 2003 by Seanna O’Neill. That little puppy, now better known by the name of Euro, grew up to be the first Picard to complete the 60 weave pole challenge, became a member of the Superdogs shows and featured in the movie Daniel and the Superdogs (3),  a 2004 family drama written by Richard Schlesinger and directed by André Mélançon. 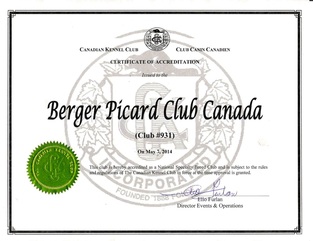 Once the breed was officially recognized by the Canadian Kennel Club and our American neighbours were working towards the same recognition by the AKC, it became important to create a national breed club that would set standards, offer guidelines to help our Canadian breeder members, educate the general public on the special needs of this working breed and collaborate with other national breed Clubs worldwide.  A first attempt was made under the presidency of Mr. Vezina and a club by the name of Club Canadien du Berger Picard was created in January 2010. Although this club had been formed as a national club, it was not accredited by the Canadian Kennel Club as such and it did not represent the breed across Canada. In August 2011, eighteen months later, a second club was founded under the name of Berger Picard Club Canada by another group of Berger Picard fans and two of the co-founders of the first Club. Berger Picard Club Canada wanted to prioritize health issues by implementing mandatory annual eye testing for its breeder members and wanted to achieve the status of national breed club in order to be allowed to hold official CKC events. Out of respect to the first club, Berger Picard Club Canada’s board of directors decided to put the accreditation project on hold for two years thereby giving the opportunity to the first club to go ahead with a national CKC accreditation request if that was their wish. In 2013, Berger Picard Club Canada informed their members that they would undertake the CKC accreditation process and after complying with all the requirements, BPCC received National Breed Club status from the Canadian Kennel Club (4) on May 7th, 2014. 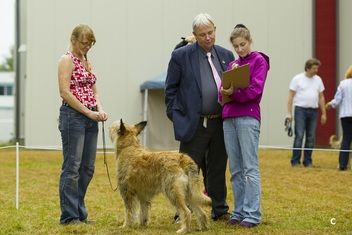 Over the last 10 years, some 203 Berger Picards (5) were either born or imported into Canada, but this doesn't accurately reflect the Canadian Berger Picard population since many of the puppies born in Canada were adopted into American homes. The current estimated number of Picards in Canada is between 125 and 150 dogs. Although the population of Berger Picards has tripled over the last twenty-five years, this does not guarantee its sustainability. At this time, there are only five breeders in the country and most of them only produce puppies occasionally. Without mentorship from established breeders, breed promotion and education from the breed clubs, and a will to preserve this amazing breed by all Berger Picard enthusiasts, the breed could once again become a rare sight in Canada as it was in the 1990’s.

A European judge, Mr. Jan de Gids, was brought in to evaluate the Berger Picards. Those eligible were judged under the CKC rules and all Picards present were evaluated under the FCI style evaluation method with a written evaluation and commentary from the judge. The event brought together 22 Berger Picards and their people, and on that day, the CKC registered the largest Berger Picard show and trial entries in its history (d).

By coming together, knowledge can be passed on, experience shared and wisdom gained, enabling the Berger Picard community to become stronger, and more sustainable. The welfare of the breed truly benefits from such collective efforts. We sincerely hope that these recent events are just the first of many for our club and its members.

Although the Berger Picard is the oldest French herding breed, it is still very new to Canada and every decision made today regarding this amazing breed will be part of tomorrow’s history. Everyone involved from near or far in this breed is responsible for the future of the Berger Picard in Canada. Together lets create an amazing future for an amazing dog!

Photo A and B with permission to publish from Mrs. Catherine Porter-Lewis